Coach Geisinger earned his Bachelor of Science and Masters of Education degrees from Vanderbilt University, where he was also a member of the football team. He was a four-year starter at left tackle, a two-year captain, and an All-SEC selection and Outland Trophy nominee his senior year for the Commodores. He was drafted by the Buffalo Bills in the sixth round of the 2005 NFL draft. His professional career spanned five years playing for the Bills, Tennessee Titans, Washington Commanders, and Carolina Panthers. For the last seven years, Justin has been the head football coach at Pope John Paul II High School, leading the Knights to multiple state playoff appearances including a TSSAA DII Class AAA State Semi-Finals appearance in 2021 and increasing the school’s season win totals each year.

Justin is the epitome of an education-based athletics educator and coach. He understands the rigors of building a program from the ground up and energizing a school community,” said Franklin Road Academy Athletic Director Kris Palmerton. “His faith and passion for education, football, and developing young men into future leaders is insurmountable. I am excited to walk alongside Justin on the journey of continuing to build the Panther football program.”

“This is a special opportunity for my family and two boys to become immediately entrenched into the FRA community, and I am excited to be joining the school as the head football coach. The school’s faith-based mission aligns well with my beliefs in building a program around a strong school community, and I look forward to the new challenges ahead. Together, we will continue to organically build a strong culture through the game of football. Developing strong relationships will always be a priority in our program, and I look forward to advancing the strong foundations that have been established as the FRA football program pushes into the future,” said Geisinger.

“I want to thank Head of School Sean Casey and Athletic Director Kris Palmerton for their belief and trust in me as a leader for the future of the football program at FRA,” shared Geisinger. “I look forward to working with the leadership team, faculty, and staff to continue developing our program into something that will make the entire school community proud. Lastly, I am eager to begin building new relationships between our coaching staff, players, and families. It’s a great day to be a Panther!”

Ed Sanders, a native of Nashville, Tennessee and Maplewood High School, joins the Franklin Road Academy Football program after coaching at Goodpasture, Tennessee State, and Delaware State. Ed will take over as the defensive coordinator this season.

During his time with the TSU Tigers, the defensive unit ranked sixth in pass efficiency in 2014 and as high as fourth in 2013. In 2014, the Tigers held their opponents to an average of 153.3 yards per game through the air, good for fourth in the FCS.

A four-year letter winner at Tennessee State, Ed in his career helped lead the Tigers to back-to-back Ohio Valley Conference championships in 1998 and ’99. During the 1999 season, TSU posted an 11-0 regular season record and No. 1 Division I-AA and Black College final regular season national rankings. That season, Sanders was an All-Ohio Valley Conference Second Team selection and All-America candidate. He also earned the Alvin “Cat” Coleman Award as the team’s Most Outstanding Defensive Back. During the 1999 season, Sanders led the team in tackles with 100 which is third-best in TSU history (since 1987). Ed earned a bachelor’s in criminal justice from Tennessee State in 2000.

During DSU’s 2007 MEAC championship season, his unit helped the Hornets earn a No. 9 national ranking in pass efficiency defense with a 105.33 rating. DSU was 13th in the country in scoring defense (18.4 ppg) in 2007. His ’07 secondary also featured All-MEAC First Team selection Akeem Green, among the league leaders in interceptions and defended passes.

In 2002, he was a member of the Canadian Football League Saskatchewan Rough Riders. Sanders began his coaching career as a graduate assistant (secondary) at Tennessee State University in 2000. He and his wife Wajehah have three daughters, Khalia, Kaden and Tamiah, and two sons, Omarii and Travon.

After TSU Ed became the Head Coach at McKissack middle school. During his tenure the team when 16-0 and were back to back Metro City Champions in 2017 & 2018. Ed then went onto coach at Harding Academy and then moved on to Goodpasture Christian High School. Here he served as the Defensive Coordinator for defense in 2020 and held opponents to 17 points per game. The team went 9-3 on the season and made it all the way to the State Semi-Finals. Right now Ed is the defensive coordinator and also coaches the linebackers. He also serves as a Middle School physical education instructor and will be the head coach of the boys middle school basketball team.

Coach Matt Hanson played football at Birmingham-Southern College while receiving his Bachelor of Arts. Coach Matt began coaching football as the offensive line coach at Pope John Paul II in 2017 and taught English for 3 years. He also assisted the Strength and Conditioning program. He has since received his USAW Strength Certification in 2020. At Pope John Paull II in 2020 he took over as head strength and conditioning coach.

Mark has been married to his wife Candi for 15 years with 2 wonderful boys aged 7 and 3. He originally hails from Albany, GA. He graduated and played football for Georgia Southern University. After 20 years of coaching football Mark knows so much about the game. In his experience he also has coached track.

Tyler is originally from Huntsville, Alabama. He attended Troy University where he played football and studied Comprehensive Science as an undergraduate. Then he earned his Masters Degree from Troy and was a Graduate Assistant for Athletics Administration.

In 2016 Tyler moved to Baton Rouge, and worked at Parkview Baptist School. While at Parkview he taught Physical Science and served as the Middle School Director of Athletics while coaching MS Football, Varsity FB, and Varsity Golf.

Tyler and his wife, Kaitlyn, and are excited to be in Nashville and are pumped to be a part of the FRA family.

Coach Keith Jones comes to Franklin Road Academy with seven years of coaching experience at the college and high school level. He began his coaching career at his alma mater Kenyon College for three seasons, serving as the running back coach for one season and the offensive coordinator for two seasons. Keith then served as an offensive graduate assistant for three seasons at Vanderbilt University. In 2021 he joined the staff at Pope John Paul II as the running back Coach. He's a native of Detroit, MI. 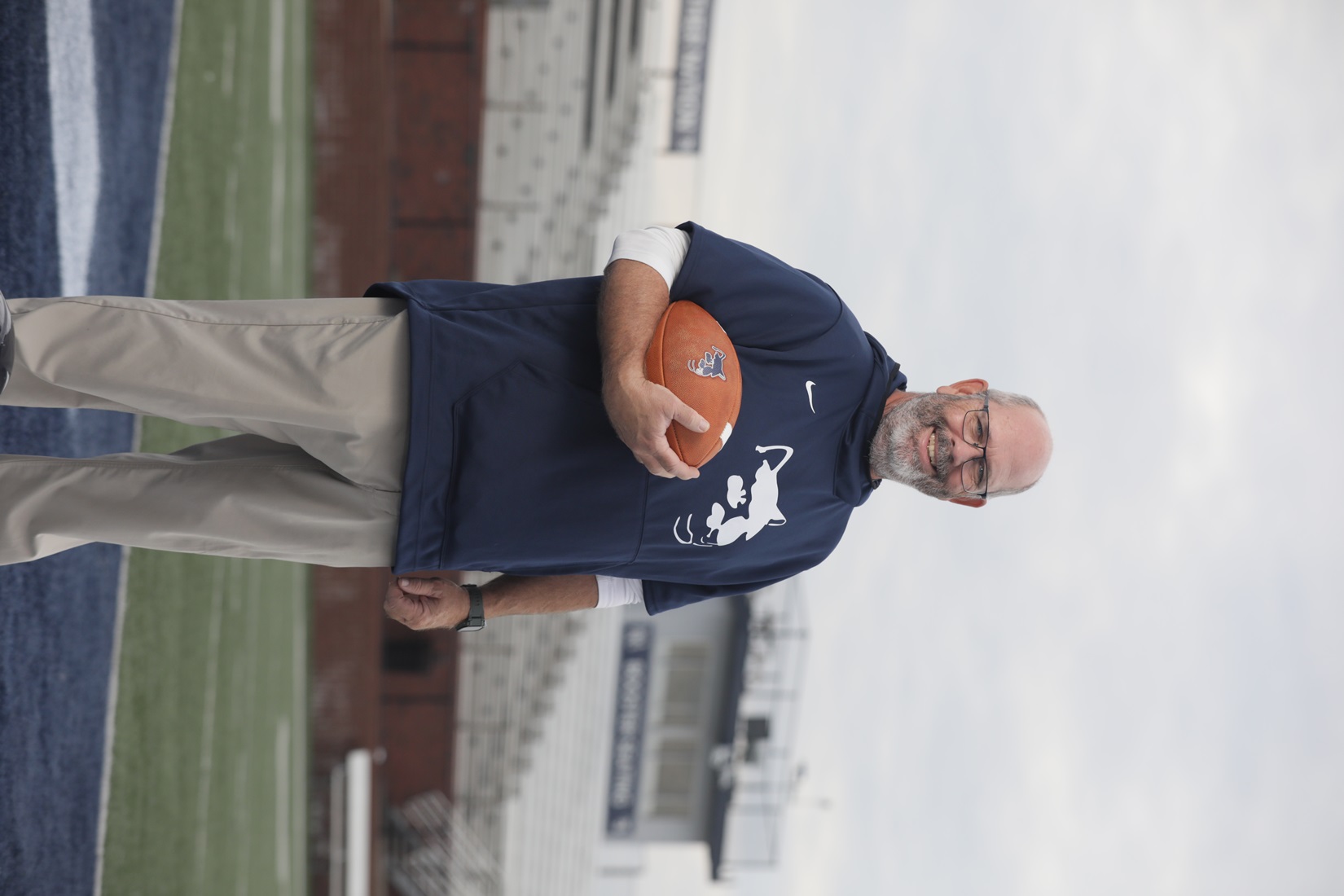 Steve Glass will be serving the team as the football technology coordinator, and working with the middle linebackers. Steve moved to Nashville when he was two years old. Growing up he attended Father Ryan. When he graduated he went on to play middle linebacker and defensive tackle. He got his bachelor of arts in telecommunications. Steve spent 20 years in the film and video production industry before he switched over to football. He started his coaching career at Holy Rosary Academy for three years as head coach.

In 2006 he moved over to Pope John Paul II where he coached the freshmen team. He then transitioned to coach the defensive line and the middle linebackers. He was at Pope John Paul II for 16 years before moving to Franklin Road Academy.

Steve has been married to his wife, Tammy Glass for 36 years. They have three children who all attended Pope John Paul II. He now has two grandchildren as well.

Coach Schmoke was an all-state tight end and linebacker at Gaylord High School. The Michigan native then went on to be a four-year letter winner and captain at Northern Michigan University. He has had coaching stops over the past 26 years at Ishpeming High School (MI) as a defensive line coach, Petoskey High School (MI) as the varsity defensive coordinator, and Polytechnic School (CA) as defensive coordinator and then head football coach. In nine years as the head coach, his overall record of 65-24-1 puts him as the all-time leader in wins at the school. His teams advanced to the play-offs in all but one of those years. The Panthers, from Polytechnic, won the league title four times, and finished the regular season undefeated twice. Five of those years his teams had the highest grade point average in the state of California. 26 of his former players went on to play college football in his time as head coach.

Schmoke has also been named regional track coach of the year twice, won 10 league titles and had 26 athletes compete in college including a pac-12 high jump champion.

Coach Schmoke has been married to his amazing wife Kristin for 21 years and has four children. Griffin is 18 and a freshman at Savannah College of the Art and Design, Bradley is 16 and a junior at FRA, Lucy is in the middle school in 7th, with Colton who is in 5th grade. 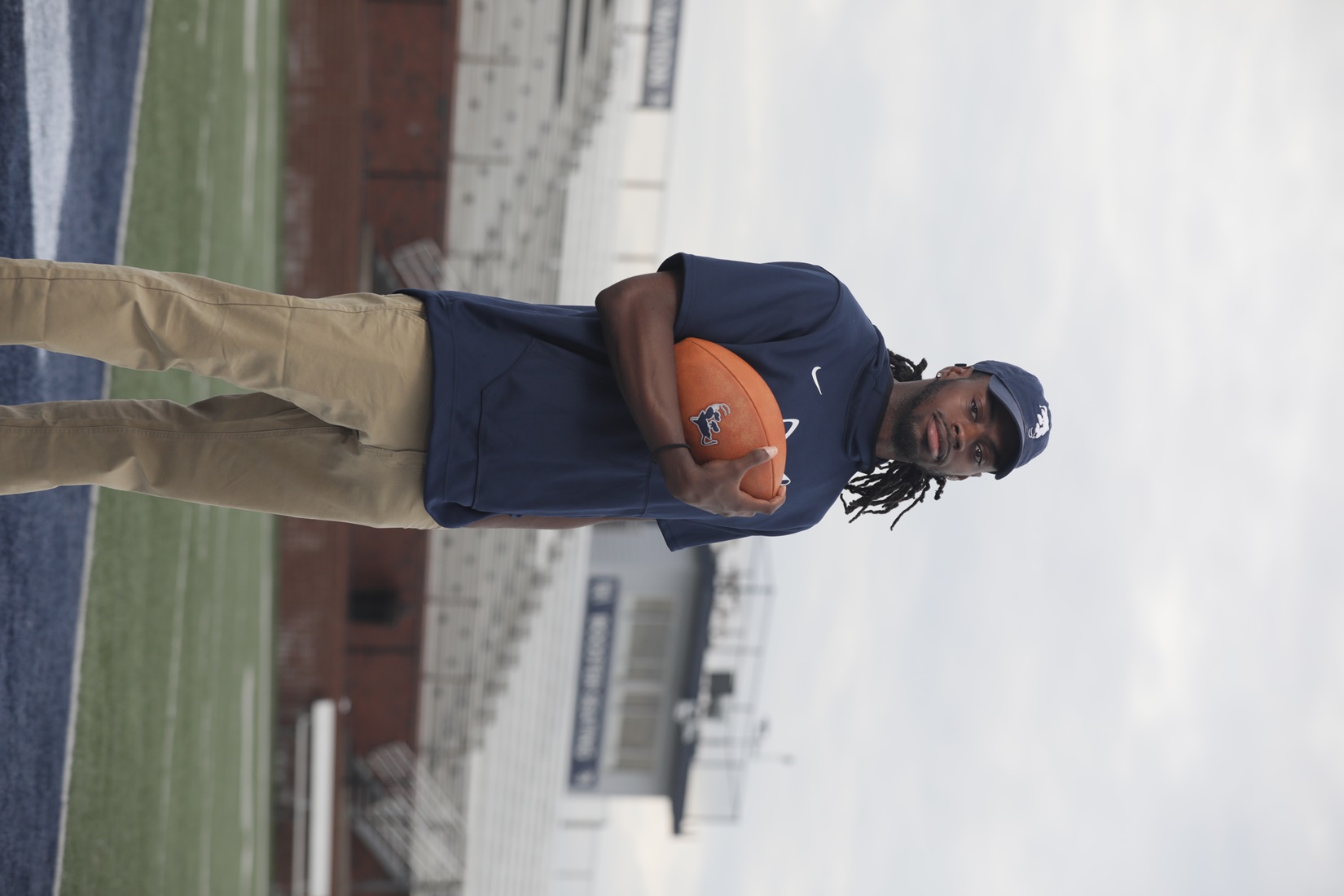 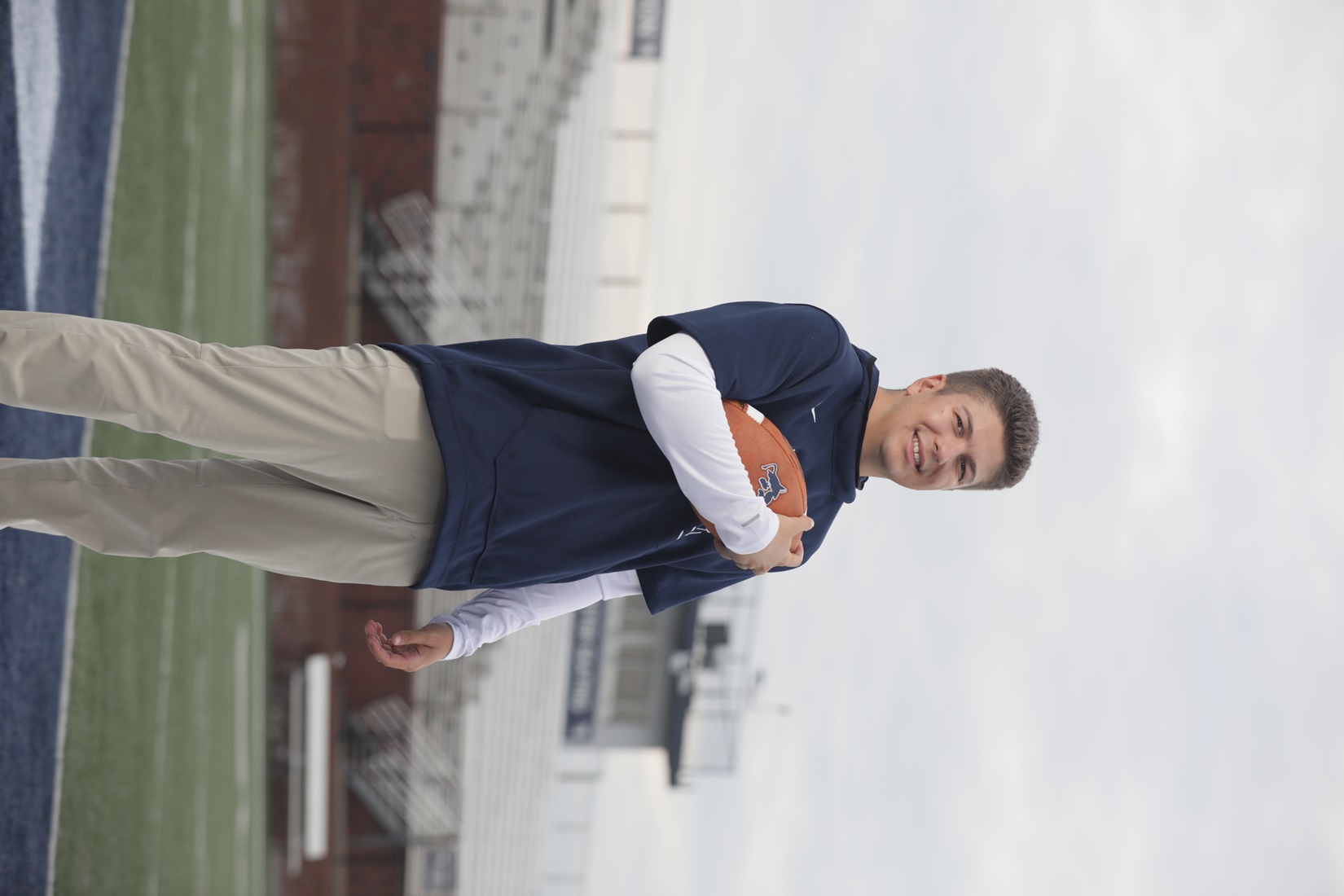 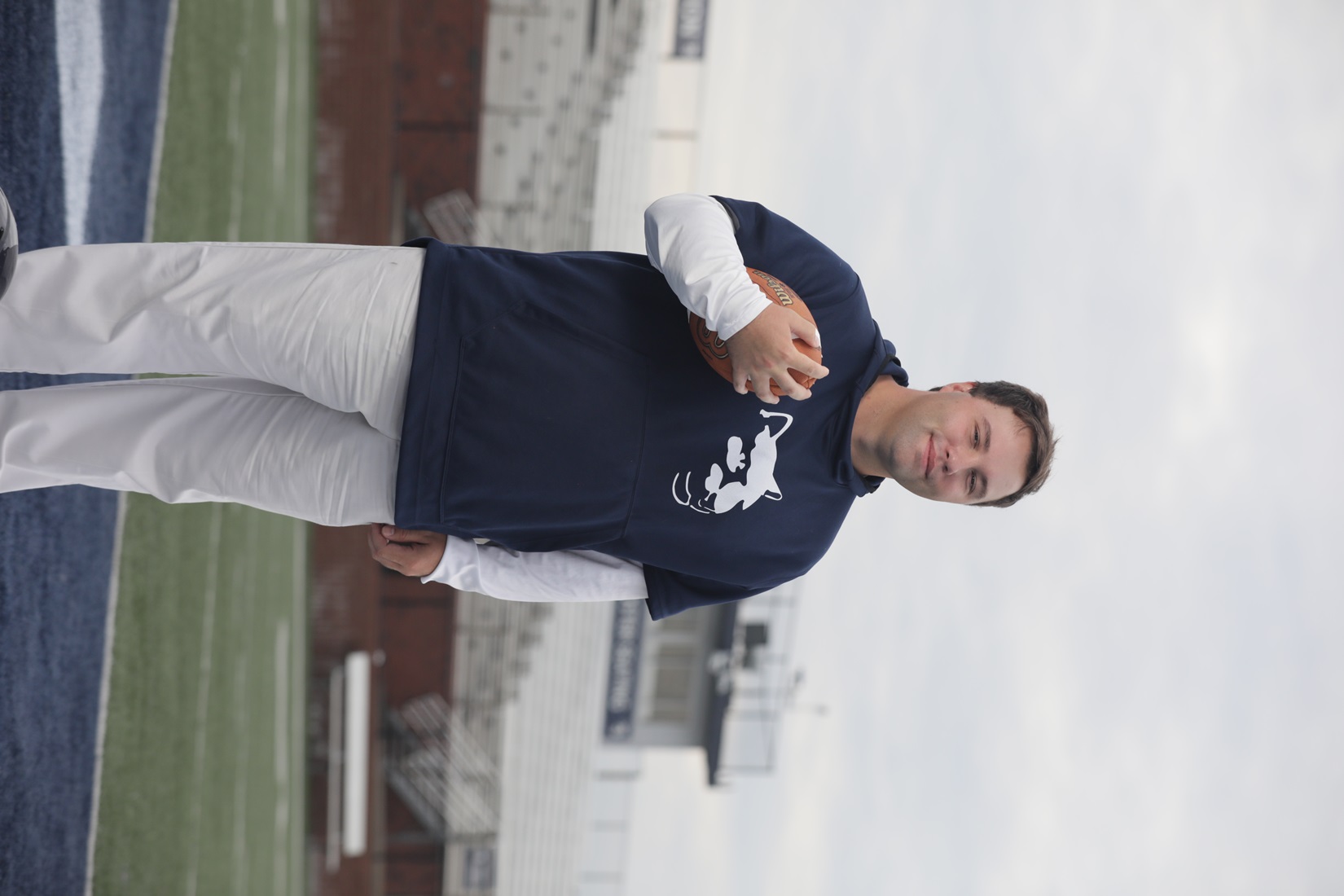 Coach Joseph Holzmer Jr. played football at Butler University and graduated from Ole Miss in 2019. In 2020 Coach Holzmer completed the Scouting Academy certification and served as a 3rd party NFL scout. In 2020 he had an internship with Tracking Football, performing data and analytics for NFL and college football.

In 2021, Coach Holzmer graduated from University of the Cumberlands with a Masters of Science in coaching. He coached wide receivers at Fr. Ryan High School the last 2 seasons and Nashville Catholic 7th-8th grade for 1 season.